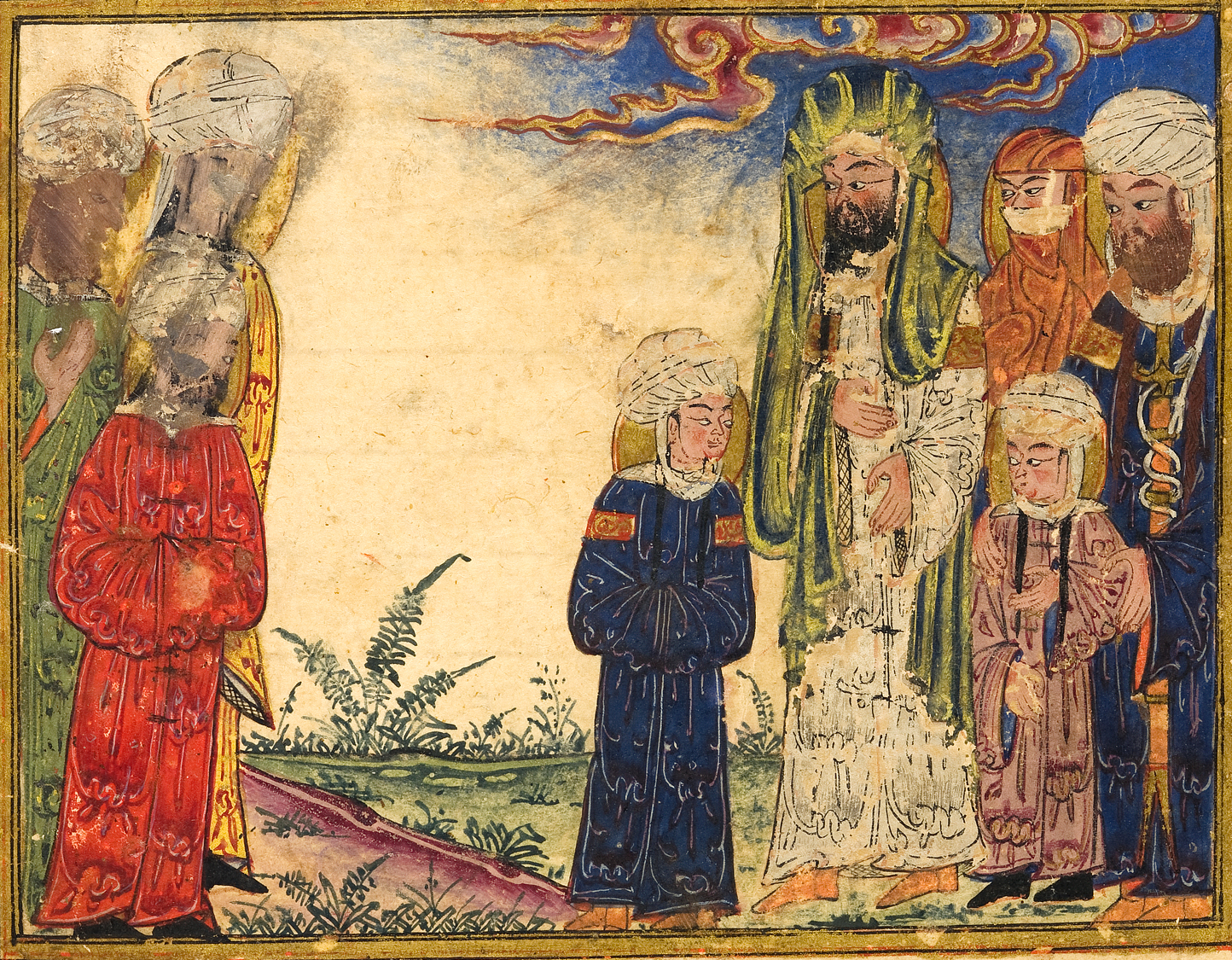 The Theological Disputation Between the Prophet Muhammad and the Christians of Najran, al-Biruni, Al-Athar al-Baqiya 'an al-Qurun al-Khaliya (The Chronology of Ancient Nations), Tabriz or Maragha, Iran, 1307 CE. Edinburgh University Library

While a number of studies have tackled the question of iconoclasm in Islam, a number of paintings reveal that the practice of viewing and responding to images in Muslim lands are much more varied than previously thought. Pre-modern pictorial evidence increasingly suggests that there existed a range of different motivations behind viewers' engagement with and manipulation of pictorial images. Such interactions highlight the complex confluences between emotive and visual expressions during both the inception and afterlife of a painted image.

This talk aims to explore the various affective interactions between viewers and images through a detailed examination of extant visual evidence, in particular manuscript paintings made in Turkish and Persian spheres between 1300-1600 CE. From newly inserted iconographic devices to the performance of symbolic destruction, it becomes clear that affective engagements that eventually resulted in pigment damage could act as pictorially articulated responses in both defense of and devotion to figural images in Islamic traditions. As a result, altered images invite us to radically rethink received scholarly paradigms so that evidence that is most frequently interpreted as a form of Islamic iconoclasm may, at least in some cases, provide clues to Islamic iconophilic practices instead.

Christiane Gruber is Professor of Islamic Art in the History of Art Department at the University of Michigan, Ann Arbor. Her primary fields of research include Islamic book arts, figural painting, depictions of the Prophet Muhammad, and Islamic ascension texts and images, about which she has written two books and edited a number of volumes. She also pursues research in Islamic book arts, codicology, and paleography, having authored the catalogue of Islamic calligraphies in the Library of Congress as well as edited the volume of articles, The Islamic Manuscript Tradition. Her third field of specialization is modern Islamic visual and material culture, about which she has written several articles; she also has co-edited several volumes on Islamic and cross-cultural visual cultures. Her next book, entitled The Praiseworthy One: The Prophet Muhammad in Islamic Texts and Images, will be published this fall.

Her research has been supported by a number of grants, including the Guggenheim Prize, Max-Planck Foundation, the Mellon Foundation, the Council on Library and Information Resources, the National Endowment for the Humanities, the American Research Institute in Turkey, Koç University's Research Center for Anatolian Studies, the American Institute of Iranian Studies, the American Research Center in Egypt, and Fulbright-Hays. Over the past twenty years, Prof. Gruber has taught at the University of Michigan, Indiana University, University of Pennsylvania, Humboldt University, Sorbonne University, and the Louvre Museum. She also has served on a number of scientific, professional, museum, exhibition, and publication boards; among others, she is currently a member of the advisory board of the research group Bilderfahrzeuge: Warburg's Legacy and the Future of Iconology.