University and Diversity: The Bolognese Experience (1088–2017) 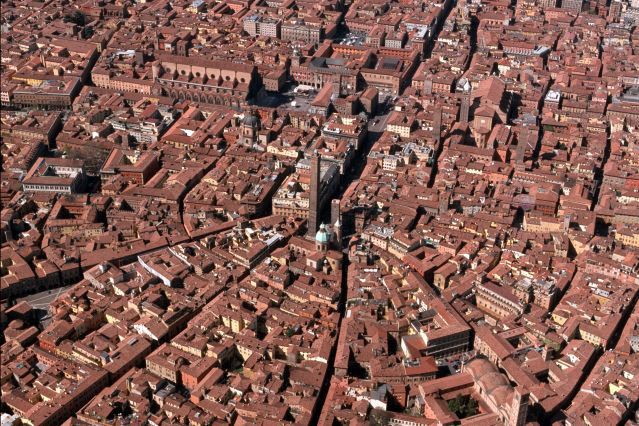 In 2013, the Municipality of Bologna set up a competition to find a logo that represents ‘at a local, national and international level’ all the ‘features and elements that make up the face of the city’. The winning project è Bologna provides a visual translation of the endless perceptions of the city, linking letters to geometrical forms inspired by archetypical Bolognese images, such as the city walls and the brick mosaic of Santo Stefano. By typing a script, these forms are superimposed with fixed proportions and chromatic relationships. Thus, written words generate different but related signs that render the ‘multiplicity of elements which describe Bologna’.

The 2017 Summer School (Studienkurs) of the KHI focuses on universitas and diversitas, concepts that are emblematic of Bologna from the medieval to the modern period. The idea that the sum of all things comprises a whole entity (universum) provides a starting point for exploring the city, whose urban fabric is characterized by its former canals, medieval towers and porticoes. Bologna’s university, the Alma Mater Studiorum, considered to be founded in 1088, encapsulates the city’s manifest identities through its original organization as a conglomeration of loose societies called  ‘nations’; the teaching of canon and civil law and medicine; and the training of personages such as Petrarch, Leon Battista Alberti and Copernicus. Bologna as a cosmopolitan city is shaped further by its relationship to religious institutions (the Dominicans and the Papacy, for example); by persons acting on an ‘international’ scale, such as the Bentivoglio, Gabriele Paleotti, Ugo Buoncompagni (Pope Gregory  XIII), Pier Paolo Pasolini; and by the artworks within the city of Nicola Pisano, Giotto, Raphael, Giambologna or the Carracci. Carlo Cesare Malvasia, writing in the seventeenth century, described Bologna as the ‘metropolis of a kingdom’ due to its role as the capital of ancient Etruria and as the ‘school of the universe’ for having taught philosophy, letters and religion before all other cities. The images of the city as an important geographical crossroad linking central and northern Italy to the rest of Europe and as hub of learning, culture and avant-garde thinking pervades into modern times. They impacted, for example, the tragic bombing of the city during World War II or the Neo-Fascist attack at the Central Station in 1980, a site that in recent years witnessed the construction of the Alta velocità railway, with its projected architectural complex by Isozaki-Maffei.

The seemingly disparate histories of Bologna will be explored through notions of universitas and diversitas in an attempt to better understand the common links that, just as in the dynamic logo,  comprise the character of the city and will allow the Summer School to engage, more generally, with the mechanisms that contribute to the cultural constructions of multi-faceted urban centres and their relationship to surrounding and interconnected environments. Shifting between synchronic and diachronic approaches, topics to be explored, through individual presentations and discussions, include: Santo Stefano and its artistic and religious connections to the Eastern Mediterranean; Bolognese manuscript illumination and its ‘international’ impact; the open-air tombs of professors of law and medicine; ‘foreign’ cults within the city, such as the Madonna di San Luca and the Madonna of Guadalupe; spaces as places for display and as sites of alterity: relics, bodies and burials of saints (e.g., St Dominic and St Caterina Vigri), anatomical waxes, collections of natural objects and artefacts with transcultural trajectories, especially to the New World and the Ottoman Empire, and their role in the history of science and scientific knowledge (Ulisse Aldrovandi and Ferdinando Cospi); as well as the writing of artistic traditions and the so-called Bolognese School of Painting. How does the city space and the civic cultures embodied within it participate in connecting the local with the universal? How can shifting notions of university/universality and diversity be described and analyzed within the interplay of individuals and groups that together make up the experience of the city?

The Summer School is for selected participants only.