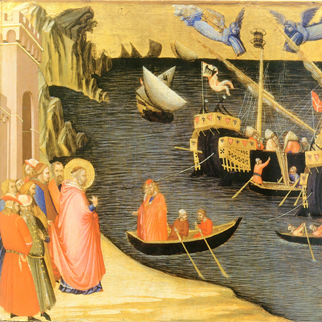 Ambrogio Lorenzetti was one of the most important artists of late-medieval Europe, celebrated also by the earliest writers on art, as for instance in the Commentarii of Lorenzo Ghiberti. Studies – often of the highest level – are usually concentrated on the master's frescoes in the Palazzo Pubblico in Siena, the Allegories and Effects of Good and Bad Government: crucial manifestos of the political ethics of Italian city-states in the late communal era and in particular during the Sienese government of the Nine. In the present exhibition, however, the conceptual richness of this ensemble of frescoes is complemented by a close study of all Ambrogio's other extraordinary paintings, which are being brought together for the first time in this exhibition. Altogether they testify the artist's genius in giving form to complex ideas. So the present exhibition, preceded by an intensive programme of research and important campaigns of restorations, represents an opportunity to reconstruct the extraordinary artistic career of Ambrogio Lorenzetti, including a comparative analysis of his relation to the works of his brother Pietro, and to those of Simone Martini and Duccio di Buoninsegna. It is right, it is natural, that this unprecedented initiative should take place in Ambrogio's hometown of Siena, in which approximately seventy of the hundred or so of the painter's surviving works are preserved. The exhibition venue is the ancient hospital of Santa Maria della Scala, now transformed into an important civic museum. Thanks to a series of strategic loans – including works from the Musée du Louvre, the National Gallery in London, the Gallerie degli Uffizi in Florence, the Musei Vaticani, the Städel Museum in Frankfurt am Main, and the Yale University Art Gallery – the exhibition has tried to reunite, almost in its entirely, the artistic corpus of Ambrogio Lorenzetti and ensures the re-convergence on Siena of the paintings that were in large part commissioned by and produced for the churches and citizens of the town.

The exhibition aims to reflect on the artist's exceptional style, on how it changed in the course of time, on the extraordinary intellectual qualities expressed by his innovative iconographies, and on the artist's role in the development of particular genres of painting. It also tries to reconstruct some extremely famous, but largely destroyed, cycles of frescoes. Thanks to the surviving fragments, in the catalogue and in the exhibition the mural paintings of the chapterhouse and cloister of the Franciscan convent, those in the chapterhouse and convent of Sant'Agostino in Siena and the frescoes in the chapel of San Galgano in Montesiepi, are ideally brought back to life. Alongside these paintings, the other surviving works of Ambrogio Lorenzetti are almost entirety re-assembled in the exhibition in Santa Maria della Scala and presented in the catalogue with studies dedicated to them. The catalogue complements the exhibition with a section dedicated to those works not on display and includes the archival documentation related to the artist. More especially it represents an important summation of our present knowledge of the master: an opportunity not only to review the historiography of Ambrogio Lorenzetti, but also to augment our knowledge of the painter, his works, his patrons, his biography and the world he lived in. So this catalogue, published by Silvana Editoriale, can claim to be genuinely innovative: an essential tool for understanding Ambrogio's creations and elucidating his intellectual development.

In cooperation with the experts who curated the exhibition, a longer-term programme of preparatory measures was launched in 2015 with the Dentro il restauro initiative. The exhibition represents, indeed, the culmination of a multi-stage project aimed at deepening our knowledge of the artist's career, promoting the better conservation of his works and facilitating the opportunity for the public to visit restorations in progress. Thanks to the Dentro il restauro project some important works of Ambrogio were transferred to Santa Maria della Scala for preliminary analysis and restoration: namely, the cycle of frescoes detached from the chapel of San Galgano in Montesiepi and the polyptych from the Sienese church of San Pietro in Castelvecchio; the latter, on this occasion, finally reunited with its original gable depicting the Blessing Redeemer. These restorations were continued with the opening of two other major restoration projects: the first in the church of San Francesco, aimed at recuperating the frescoes in the former chapterhouse of the Franciscan friars, and the other in the church of Sant'Agostino, in the chapterhouse of which Ambrogio Lorenzetti painted a cycle of stories of Saint Catherine and the articles of the Credo, as described by Ghiberti in his Commentarii. These restorations, launched with the aim of promoting wider public involvement in and familiarity with the art of  Ambrogio, were combined with an innovative programme of preliminary research, which has permitted a renewed knowledge of the works of this great protagonist of Italian fourteenth-century art.

The exhibition is being held under the auspices of the President of the Italian Republic and with the patronage of Italy’s Ministero dei Beni e delle Attività Culturali e del Turismo and of the Regione Toscana.

The exhibition and its catalogue have been curated by Alessandro Bagnoli, Roberto Bartalini and Max Seidel.

The museum display of the works in the exhibition has been designed by the Studio Guicciardini&Magni.