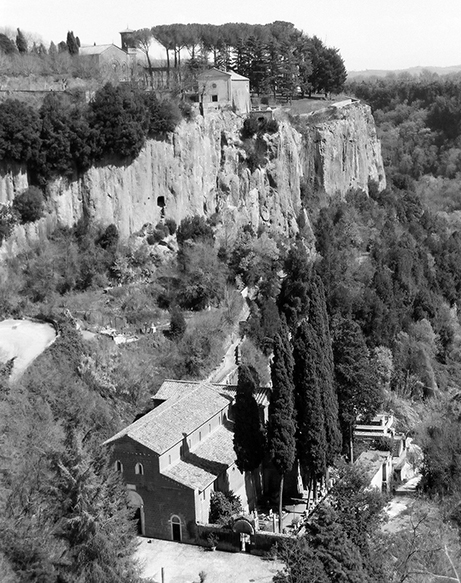 The fame of Italy's sacred terrain spread through medieval western Europe in time and in space, as the Dialogues of Pope St. Gregory the Great were one of the most copied and most read books of the Latin Middle Ages. This text, written during the late sixth or early seventh century, detailed episodes from the lives of a large number of holy men and women who resided and acted in the Italian peninsula. Keyed closely to the Italian landscape, the Dialogues placed its dramatis personae in relation to cities and Roman consular roads, but also to such natural features as cliffs, rivers, caves, and valleys. This transferal of holiness from humans to the built and natural environment was supported in many of the accounts related by Gregory by a direct divine appearance within or modification of the Italian landscape. Voices emanated from clifftops, rocks miraculously disappeared from otherwise arable terrain, hermits discovered caves within which to perfect their faith, briars disciplined rebellious bodies. It was also supported on the empirical level by early and later medieval clerics, including above all monastic communities, who settled into these Gregorian landscapes, building churches and chapels that further instantiated these locations' holiness while also tending to the landscape itself: preserving it, adorning it, depicting it, traversing it. During the early medieval period this topographical precision helped the text achieve one of its objectives, to establish Italy as a new terra sancta, a land made holy through the presence of sacred persons and events, just as the original Holy Land of the eastern Mediterranean had been sanctified through the persons and actions described in the Christian Bible.

Landscapes of St Gregory: Topography of the Sacred in Medieval Europe is the first presentation of a new interdisciplinary project bringing together art and architectural history, archaeology, anthropology, history, theology, and environmental and memory studies in an exploration of the creation, social and communal functions, dissemination, and preservation of predominantly monastic landscapes that are linked, directly or mimetically, to Gregory's Dialogues–a project given further urgency by the recent seismic events that have remind us of the vulnerability and mutability of these sacred landscapes.

Alison Locke Perchuk is an art historian specializing in the study of the art and architecture of medieval Europe and the Mediterranean basin, with a particular emphasis on twelfth-century Rome and central Italy. Her current book project, The Monastery of Elijah near Nepi: A History in Paint and Stone, examines the intersecting roles of the visual arts, architecture, ritual, and landscape in the creation of communal identity, and she has recently published articles on medieval Italian art in Gesta, California Italian Studies Journal, and Getty Research Journal. Dr. Perchuk holds degrees from Williams College, The Catholic University of America, and Yale University. She is currently Assistant Professor of Art History at California State University Channel Islands, where she teaches courses on ancient, medieval, and Islamic art and architecture and on the Middle Ages in the modern world.