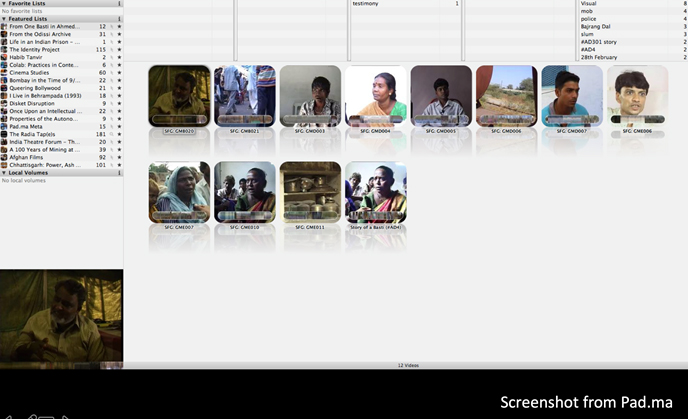 The digitised habitats of the world are today witnessing to the consolidation of a new ecology of images. Relational, material, haptic and immersive by nature, "new images" seem to promote also new practices of image-making characterised by non-linearity, interactivity and new forms of participation. Yet, what does this mean for the way in which the practice of ethnographic documentary film is evolving and especially for its capacity to promote instances of social intervention and advocacy? The present talk dives into this terrain from the vantage point of a particular documentary project born in India in 2002 in the aftermath of the Gujarat carnage. An audio-visual database created by a small group of artists/activists animated by the desire to generate material that could be used by filmmakers, lawyers, human rights organization etc., The Shared Footage Group's project is probably a precursor of what we today call non-linear, interactive documentary. Constituted by images filmed in different formats and with different perspectives, and funded entirely by donations (as to remove it from any possible forms of control) this archive managed, however, not to have the desired impact. The images got dispersed, migrating between a number of different actors and archives. This failure forces us hence to enquire into the destiny of raw footage. Can raw footage ever exist? Can documentary film live in the absence of authorship? What is the future of documentary film in a world increasingly characterised by the merging of the digital and the visual?