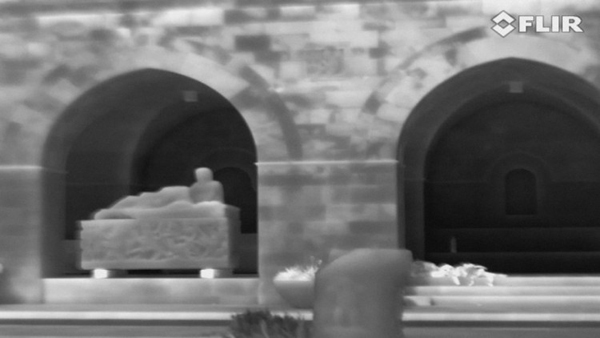 The lecture discusses to what extent the Gothic genre is linked to colonial histories by employing references to contemporary art. Specifically focusing on the video work entitled "Heat Archer" (2012) by the Tel Aviv-based artist Uri Nir, the lecture explores how, despite the lack of an explicit mention of colonial issues, the video can be characterized by the term "colonial gothic" quite well.  It is the particular setting of "Heat Archer" that seems responsible for activating this connection. The video was shot in the Rockefeller Museum in Jerusalem, which was constructed as an archaeological museum by Austin St. Barbe Harrison during the times of the British Mandate in Palestine. The lecture will investigate in what way and by which means art articulates the flipside of archaeological objects of knowledge.

Susanne Leeb is an art historian and critic and currently teaching contemporary art at Leuphana University Lüneburg, Germany. She graduated in art history, philosophy, German literary studies at the University of Cologne. For three years she worked as co-editor of Texte zur Kunst, before she took her doctoral degree from the Europa-Universität Viadrina in Frankurt/Oder with a dissertation on The Art of the Others. Worldart and the Anthropological Configuration of Modernity (appeared as book in 2015 with b_books, Berlin). Since 2007 Susanne Leeb has been research associate at the collaborative research center Aesthetic Experience and the dissolution of artistic limits at the Freie Universität Berlin. After having been "Laurenz"-profesor for contemporary art in Basel, she has been working in Lüneburg since 2014. Her recent publications include as editor: Materiality of Diagramms. Art and Theory, Berlin: b_books 2012; Globalism, Texte zur Kunst Nr. 91, with Kerstin Stakemeier and Johannes Paul Raether, 2013; Entangled – But How? in: Art in the Periphery of the Center, ed. by Ulf Wuggenig et al., Berlin: Sternberg Press, 2015; We are You, Texte zur Kunst Nr. 103, with Helmut Draxler and Isabelle Graw, and in the same issue: Local times or The Actuality of the Antiquity, March 2017.