Denva Gallant
Illustrating the Vitae patrum: The Rise of the Eremitic Ideal
in Fourteenth-Century Italy 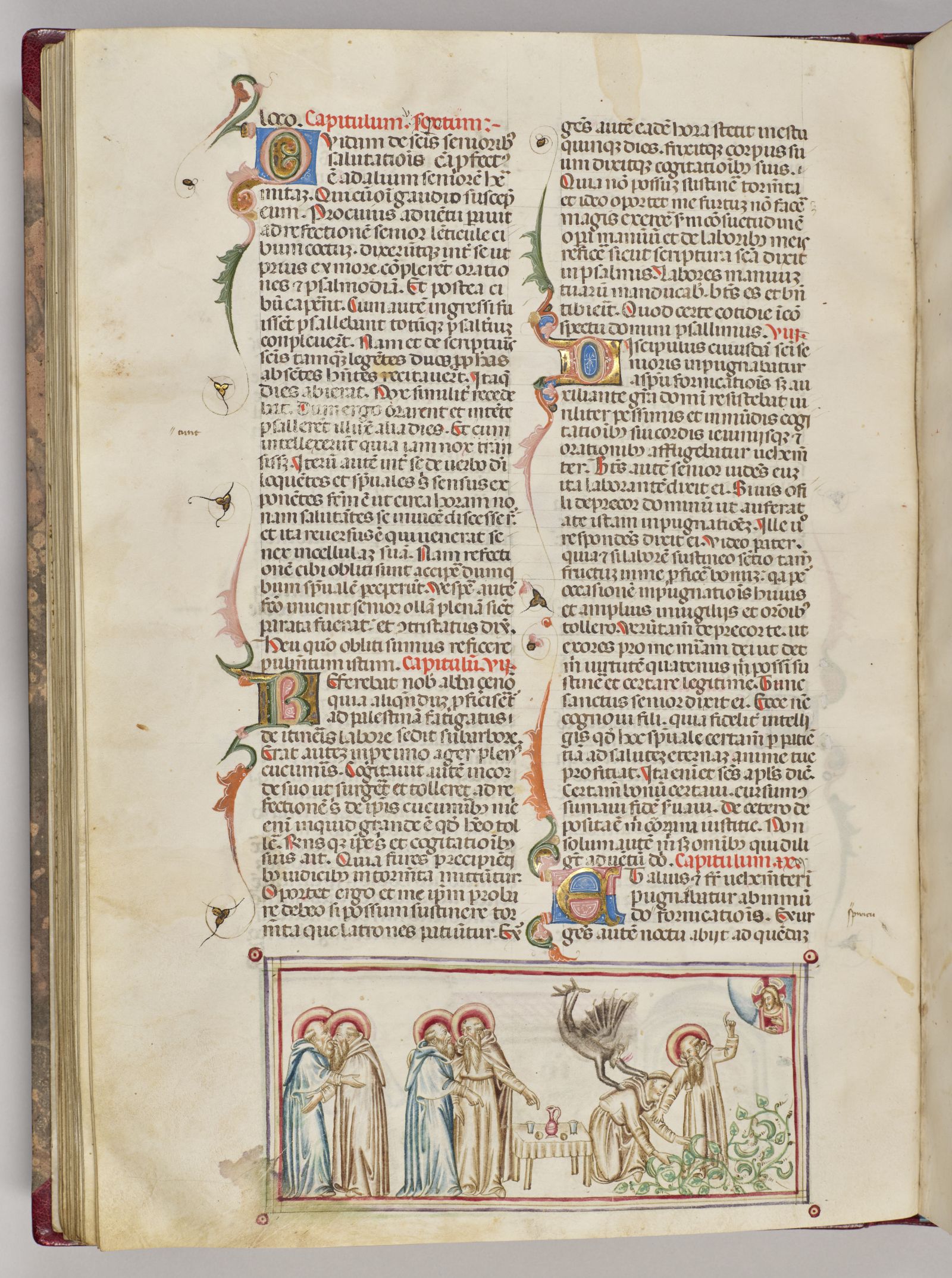 In the late third and fourth centuries, a number of men and women from Egypt, Palestine, and Syria chose to make a daring break with society, renouncing their familial claims and wealth so that they could lead a life of perfection in the desert. By withdrawing from society to the desert to undergo the ultimate test of faith, these men and women, known to later generations as the Desert Fathers and Mothers, committed themselves to sacrifice, to an exclusive reliance on God, and to the letting-go of ego. Their lives became legends that resonated across the centuries to come. In particular, beginning in the fourteenth century, mendicant orders in Italy saturated the Christian devotional landscape with stories of the hermit saints, extolling the ascetics as exemplars of an ideal piety that was worthy of emulation. Coinciding with this resurgence in interest in the Desert Fathers and Desert Mothers was the sudden and unprecedented emergence of images of the desert saints.

Illustrated in the kingdom of Naples around the year 1336, New York, Pierpont Morgan Library, manuscript M.626 represents a singular witness to the rise of the eremitic ideal and its impact on the visual culture of late medieval Italy. It is distinguished from other illuminated manuscripts both by the quantity of the illustrations—272 images illustrate the lives of over thirty Desert Fathers and Mothers—and by the characteristics of its visual narratives. The illuminators of the Morgan manuscript provide the viewer with an expansive visual narrative that depicts (and often recommends) the process by which the saint achieved his or her sanctity or closeness with God. This lecture introduces a variety of manuscripts of the Vitae patrum—from the less extensively illuminated manuscripts to the most fulsomely illustrated dated to the fourteenth-century. It focuses, however, more narrowly on Morgan manuscript M.626 and considers just how its illuminations emphasize and in turn offer the contemplative life as exemplar.

Denva Gallant is a specialist in European medieval art and architecture, with an emphasis on manuscript illumination and the figural arts of the Trecento. Her scholarly work explores themes of narrative, the rise of the eremitic ideal as exemplum virtutis, and issues of patronage in the Middle Ages. She has received a number of research fellowships including awards from Villa I Tatti, the Harvard University Center for Italian Renaissance Studies and Center for Advanced Study in the Visual Arts. She is currently the recipient of the Samuel H. Kress Foundation Rome Prize in Medieval Studies for the 2022-2023 academic year.  Her current book project, Illustrating the Vitae patrum: The Rise of the Eremitic Ideal in Fourteenth-Century Italy, is the first work to examine comprehensively the Morgan Library’s richly illustrated manuscript of the VP (MS. M. 626), whose extraordinary illustrations comprise a singular witness to the rise of the eremitic ideal and its impact on the visual culture of late medieval Italy.

This event will take place in a hybrid format.

To participate online please register in advance via Zoom: https://zoom.us/meeting/register/tJAlduioqzwjE9wsNMNWNaPurqdH5tgTto2E